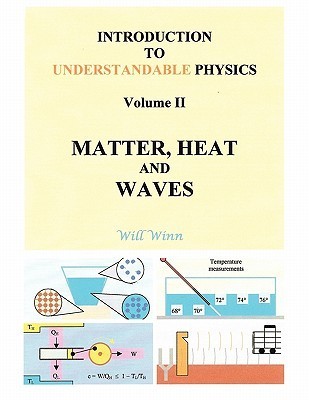 The present volume begins with a historical review of how the atomic nature of matter was discovered. Then this background is applied in the study of solids, liquids, and gases. Next the kinetic nature of gases is extended to examine heat and temperature concepts for the above states of matter. Following a study of heat transfer modes (conduction, convection, and radiation), thermodynamics is introduced to examine heat engines and the concept of entropy. Next a study of the general nature of waves is appropriate, since a number of wave speeds had already been developed in the preceding examination of mechanics, matter and heat.

Finally, these wave concepts are applied to a study of sound, including human response and the nature of music. Near the end of each chapter a [Simple Projects] section suggests experiments and/or field trips that may serve to reinforce the physics covered. Some of the experiments are simple enough for students to explore alone, while others benefit from equipment available to physics instructors. When opportune, the text develops relations that are revisited much later in the text. For example, both Chapters 16 and 17 develop the Stefan-Boltzmann radiation law, which is shown to be consistent with the Planck radiation law based on quantum concepts, in {Volume IV} Chapter 29.

Also {optional} text sections provide students with a deeper appreciation of the subject matter- however they are not required for continuity. Some of these optional topics can be candidates for term projects.